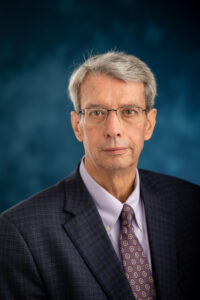 Dale has more than thirty years’ experience as a litigation attorney, the vast majority of which has been devoted to defending health care professionals and hospital systems throughout Michigan against claims of medical malpractice.  His practice concentrated on defending claims involving catastrophic injuries in some of the most complicated fields of medicine.  Representative health care systems included the Michigan Medicine and Trinity Health.  He tried dozens of cases before judges and juries in venues throughout the State of Michigan and in Federal Court.

Dale spent the first portion of his legal career practicing personal injury defense at Feikens, Foster, VanderMale & DeNardis, P.C., before founding Hebert, Eller & Chandler and practicing medical malpractice defense in that setting for nearly twenty years.  In 2007, he became a shareholder with Smith, Haughey, Rice & Roegge, where he remained until 2014 when he joined the University of Michigan Office of the Vice President and General Counsel.  Dale frequently lectures to Michigan Medicine faculty, trainees, and caregivers on medical-legal topics.

Professional Memberships and Outside Activities